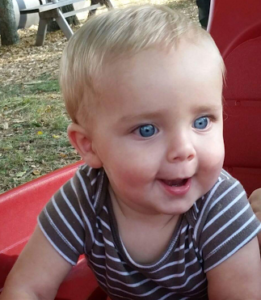 When Cole arrives at our office, the first thing that one can see are his big, bright, blue eyes and his wave of familiarity. These are the same magnificent eyes that Dr. Kimberly saw when Cole was only five days old. He was constantly crying, never sleeping over thirty minutes at a time, and his parents were at their wits end.

Amy, Cole’s mother, had received regular adjustments from Dr. Kimberly during her third trimester of pregnancy. She was very impressed by her chiropractic care, and decided that it may work for her newborn son. Marshall, Cole’s father, had been skeptical of sending his son to see Dr. Kimberly and so was asked to hold his son when he received his first adjustment. “While I adjusted Cole’s C1, he relaxed and quickly fell asleep,” says Dr. Kimberly. “I remember Marshall commenting on how he had never seen Cole sleep so hard.” Cole stayed asleep while being placed in his car seat, which, according to his parents, he had never done before.

After that first adjustment, Dr. Kimberly gave Cole’s parents her number for any questions or concerns that might arise over the weekend. She then scheduled an appointment for the following week to check on Cole’s response to the adjustment. Well, Cole not only responded beautifully to his adjustment, he scared his new parents with all the sleeping that they had to wake him up after four hours just to check on their tiny newborn. Over that weekend, Cole was sleeping longer, eating more, and crying less.

“We will always bring Cole for chiropractic care with Dr. Kimberly.” says the once skeptical father, Marshall.

Find more stories like Cole’s at stonesriverchiropractic.com or drop in and visit our office.